Together with the new Task status flow, we also made some improvements for e-signing Tasks in SciNote. Do not worry, the basic principles for e-signatures are still the same and still comply with the GxP and 21 CFR Part 11 requirements. SciNote is proud to be the chosen solution by the researchers at the FDA.

You are able to sign or co-sign the Task only in the In review status. Once you move the Task to In review state, the Task gets locked and requires at least one signature, before it can be moved to the final Done state. The Sign task button appears below the task status to the users eligible to sign the Task (all Project members).

Clicking on the Sign task button opens the modal window (the same as before), where you electronically sign the Task by entering your credentials, as you are used to. 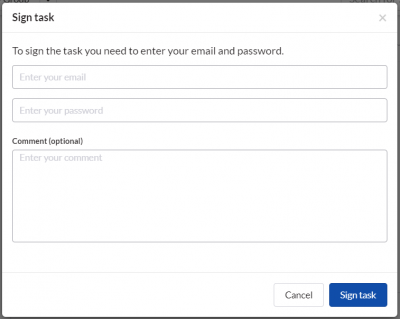 After the Task gets the first signature, other users eligible to sign (all Project members) can co-sign the Task if needed. There are no upper limits in the number of signatures. When you are done with the reviewing process, you can just move the Task to the Done state, so that everybody knows the Task is considered done.

Revoke signatures button opens the modal window similar to signing the Task, where you should enter your credentials to revoke all current signatures on the Task. 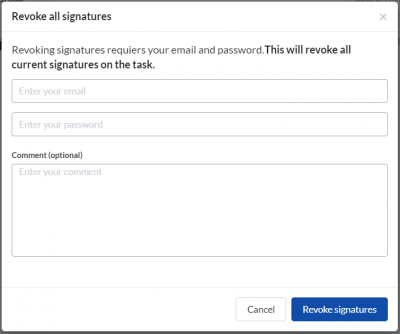 All signing and revoking signatures actions are logged in the Signatures tab on the Task page and recorded in Activities and in the Audit trail in SciNote.