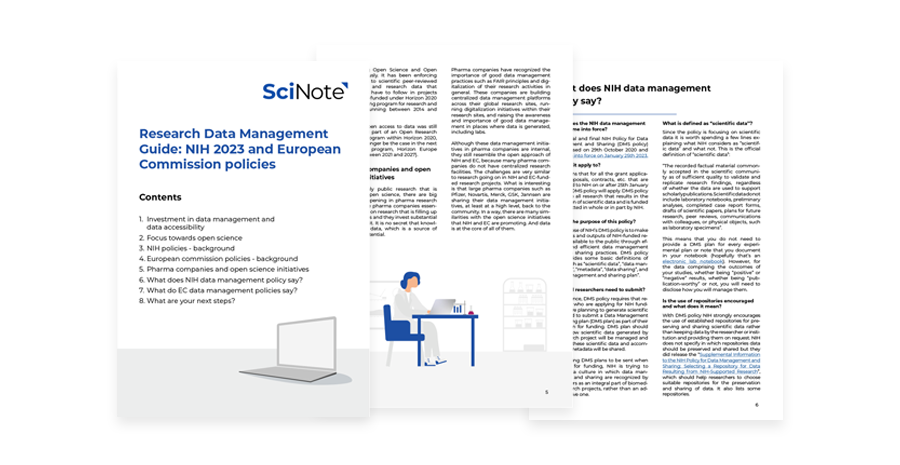 Two major research financing bodies, the National Institutes of Health (NIH) in the USA and the European Commission (EC) in the European Union independently released policies that promote the management and sharing of scientific data generated from NIH-funded and EC-funded research.

Their main predicament is empowering the people, businesses, and organizations by ensuring they have access to the data as this is essential for innovation and growth of the economy and society. This goes in line with general trends for data-driven economies around the globe.

In this article, we’ll have a look at how NIH and EC policies relate to data management practices for researchers and scientists and how electronic laboratory notebooks can help.

SciNote electronic lab notebook is trusted by researchers at the FDA, NIH and European Commission.

Get the NIH 2023 and European commision policies whitepaper

Fill out the form and receive the entire content in a readable PDF version.

Sharing knowledge and research data have become an important foundation open science initiatives are based on. Major research financing bodies, i.e. the European Commission (EC) in the European Union and the National Institutes of Health (NIH) in the USA see it as an integral part of scientific research. Adherence to the FAIR principles (Findable, Accessible, Interoperable, and Reusable) seem to be at its core as well.

Let’s have a look at both EC and NIH initiatives.

NIH is a major investor in USA biomedical research and has been promoting policies that make research available to the public from the early 2000s: the 2003 NIH Data Sharing Policy, the 2008 Genome-Wide Association Studies Policy, NIH’s 2014 Genomic Data Sharing (GDS) Policy, the NIH Policy on the Dissemination of NIH-Funded Clinical Trial Information (Clinical Trials Policy). In 2015 NIH initiated the development of a more comprehensive data-sharing policy along with modernization of data-sharing infrastructure with its 2015 Plan for Increasing Access to Scientific Publications and Digital Scientific Data from NIH Funded Scientific Research.

NIH then started seeking feedback from the community to develop a new data sharing policy, which happened in several steps during the course of 2016 and 2018. Using the public feedback, NIH released a draft proposal for a future data management and sharing policy and requested comments on it in 2019 (84 FR 60398).

Finally, NIH considered all feedback and developed the final Data Management and Sharing Policy (DMS policy) and published it on 29th October 2020.

On January 25th 2023, the DMS policy will come into force, and replace the 2003 NIH Data Sharing Policy. Along with the DMS policy, NIH also released supplemental materials that could help researchers integrate effective data management and sharing practices into research.

NIH has also committed to the financing of data repositories for public data (https://www.nlm.nih.gov/NIHbmic/domain_specific_repositories.html).

The vision for an e-infrastructure that will ensure sharing and preserving of reliable data produced during the scientific process in the European Union dates back to 2010. The High Level Expert Group on Scientific Data emphasized the critical importance of such infrastructure and provided a vision and plan for it in the final report  “Riding the wave: How Europe can gain from the rising tide of scientific data”. The group recognized that science has a pivotal role in creating economic growth and a fairer, happier society. Therefore Europe must manage the digital assets its researchers generate. EC acted on this proposal and eventually a series of Open Access (OA) initiatives and infrastructural projects started.

One of them was the European Open Science Cloud (EOSC), envisaged in 2016 within the “European Cloud Initiative” and formally launched as a platform in 2018.

The main aim of EOSC is to connect the existing research data infrastructure in Europe and realize a web of FAIR (Findable, Accessible, Interoperable, and Reusable) data and supporting services for science, making research data interoperable and machine-actionable following the FAIR guiding principles. EOSC is becoming a fundamental enabler of Open Science and of the digital transformation of science in the EU. The EOSC infrastructure has been continuously improving and will open up gradually to the public sector and industry.

EC is taking Open Science and Open Access seriously. It has been enforcing open access to scientific peer-reviewed publications and research data that beneficiaries have to follow in projects funded or co-funded under Horizon 2020 (the EU funding program for research and innovation running between 2014 and 2020).

While the open access to data was still optional and part of an Open Research Data pilot program within Horizon 2020, that will no longer be the case in the next EU funding program, Horizon Europe (running between 2021 and 2027).

It is not only public research that is promoting open science, there are big changes happening in pharma research as well. Large pharma companies essentially depend on research that is filling up their pipelines and they invest substantial funding into it. It is no secret that knowledge lies in data, which is a source of untapped potential.

Although these data management initiatives in pharma companies are internal, they still resemble the open approach of NIH and EC, because many pharma companies do not have centralized research facilities. The challenges are very similar to research going on in NIH and EC-funded research projects. What is interesting is that large pharma companies such as Pfizer, Novartis, Merck, GSK, Jannsen are sharing their data management initiatives, at least at a high level, back to the community. In a way, there are many similarities with the open science initiatives that NIH and EC are promoting. And data is at the core of all of them.