SciNote has upgraded the permission system for projects, which controls how SciNote users access projects, as well as the experiments, and tasks inside projects.

Don’t worry the upgrade was designed in a way that allows you to continue to use SciNote in an identical way as before. The majority of the upgrade is the first step that will allow SciNote to roll out additional flexibility and improvements in the future.

You can keep on using SciNote as you were used to, however, this upgrade is already bringing in some additional flexibility, which you can optionally take advantage of.

The upgraded permission system also meant that we had to introduce a few minor changes to the user interface.

Let’s review what those flexibilities and related improvements are.

The redesigned “Manage access for projects” window now has a cleaner look: 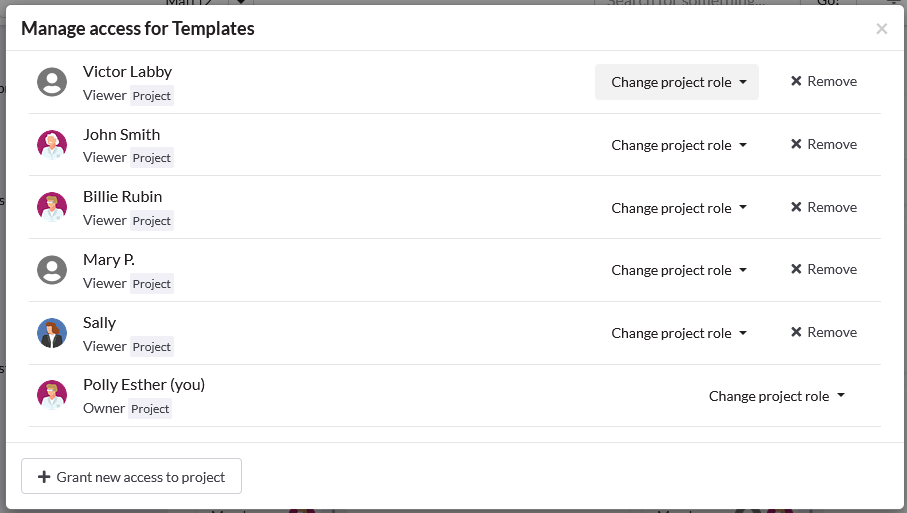 Granting new access to a project is now much easier:

You can still change the role for existing project members in the same manner as before, via “Change project role”. There you will see the same default SciNote project roles as before. The roles have identical permissions as before, despite the fact that the permission system in the back was upgraded. Therefore you will have identical experience as before in what you and your coworkers can or cannot edit on projects, experiments, and tasks. 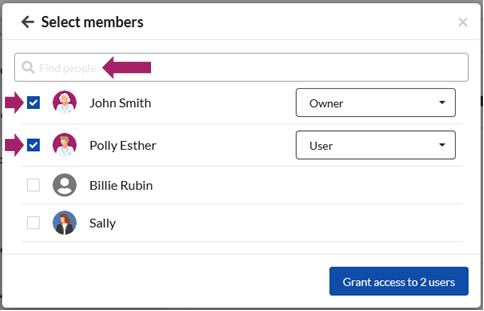 It is now possible to manage access inside projects

We added the ability to change access to users also for experiments and tasks inside projects. With this, you will be able to control the access more precisely. 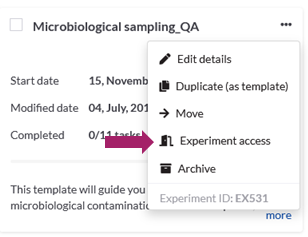 When you change a role for a specific user on a specific experiment, you replace the role the user inherited from the parent project. You will also notice that this new role will be propagated to all the tasks inside the experiment (so inheritance works in the same way on projects and experiments). 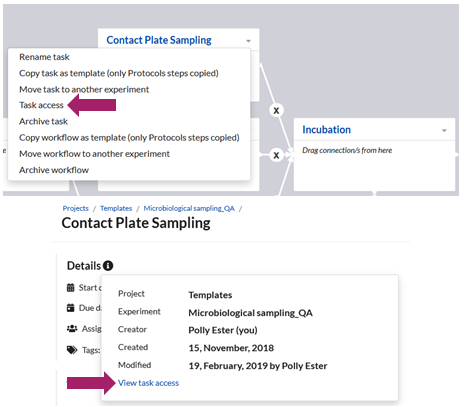 “Manage access for task” lists all project members and their roles for the same reasons described above for experiments.

When you change a role for a specific user on a specific task, you replace the role the user inherited from the parent project or experiment. You can also change user roles for locked tasks (this was also possible in the old permission system but was probably less obvious: you could change user roles or remove access for users on projects that contained locked tasks).

With the upgrade of the permission system, we had to make some minor changes presented below.

Easier moving of experiments between projects

We simplified moving experiments between projects and made it compatible with new permission system. To move the experiment to a different project (destination project), these conditions must be met:

In the destination project, the access to the moved experiment (and all its tasks) is simply inherited from the project. No access (no users and their roles) is moved along with the experiment’s content.

Up to now, projects had an additional visibility control setting: projects could be set to be visible to “Project members only” or to “All team members”. The setting was accessible when creating new projects or editing existing ones. The “All team members” option granted view access to the project and its content to all current and future team members without them being listed in the Manage project access. 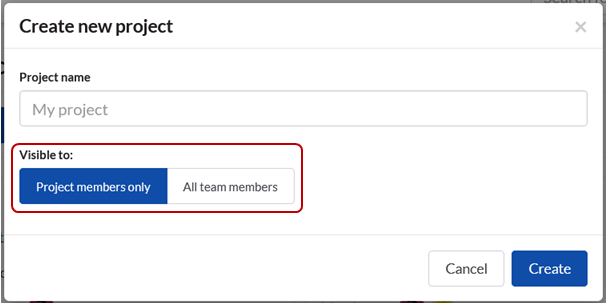 With an upgraded permission system we are no longer allowing access to projects, experiments, and tasks without that access being granted and listed via “Manage access for projects”. We introduced the following modifications, that essentially keep the functionality in place: 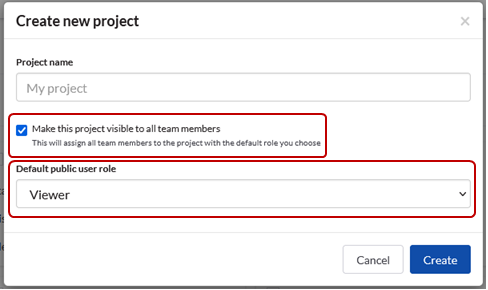 Difference between “Assigned users to tasks” and task access

To help distinguish the difference between the two we renamed „Assigned users to tasks“ to „Assigned to“. With this change, we are stressing that tasks (that represent pieces of work) are assigned to users and not the other way around.

For the same reason, we redesigned the appearance of users to which the task is assigned. Now they resemble tags. From now on the task can be assigned to the users only directly from the task screen, in much the same way the tags can (and no longer from the task cards on the canvas). 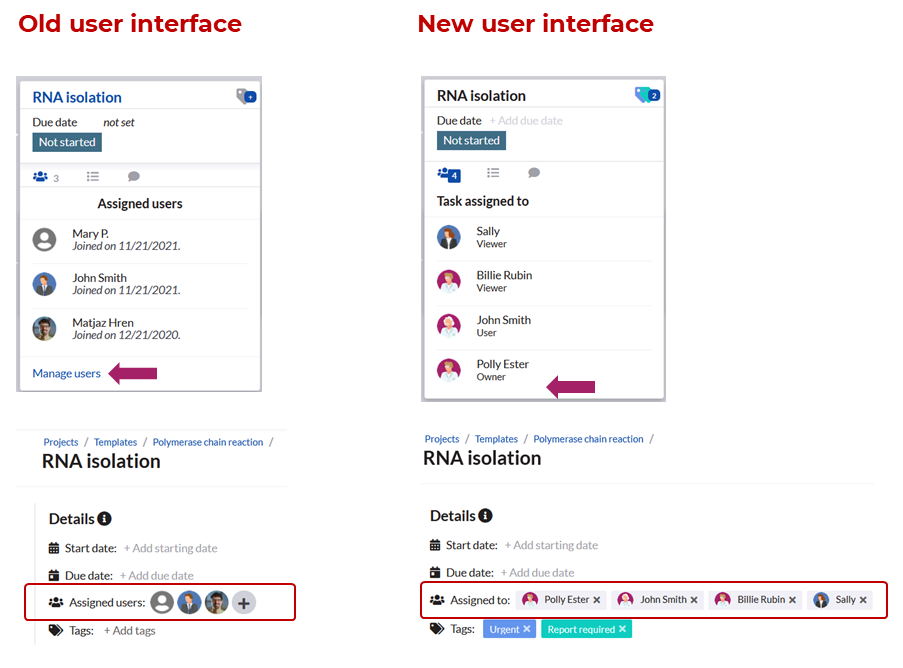 To summarize the main difference:

Assigning items to Downstream tasks in workflows is slightly different

When users are assigning inventory items to tasks, they also have the option to assign inventory items to downstream tasks (tasks connected in workflow). Items will only be assigned to tasks for which users have edit permissions (so not necessarily to ALL tasks).

All notifications that users received when they had access to an object (e.g. a task) will stay listed in their Notifications inbox after they lose access. However, the links to objects (e.g. tasks) inside the notifications will work only if users have access to them. Otherwise, a no access error will be returned.

Up to now, Team administrators had the privilege to view all projects in their team and all of the project content (experiments and tasks) even if they were not specifically granted access to the project.

From now on, Team administrators retain the privilege to see just the “surface” of the projects (project cards and projects listed in table view) and no longer have default view access to all experiments and tasks inside the projects. However, they do retain a privilege to grant themselves access to a concrete project or grant other users access to the project via the regular access management functionality. For this reason they also no longer have the  „Add me as owner“ option, but rather have to use the conventional manage access functionality.

On a related note, Organization administrator roles also lost „Add me as owner“ option for projects. They will need to be enrolled into a Team as any other user, in order to have access to projects, experiments, and tasks.

These changes will affect only SciNote API users: