Back to all release notes

This SciNote Premium release includes all updates and features that were released in CORE 1.17.7 [SciNote Free].

With this SciNote release we are introducing several exciting improvements for our users! 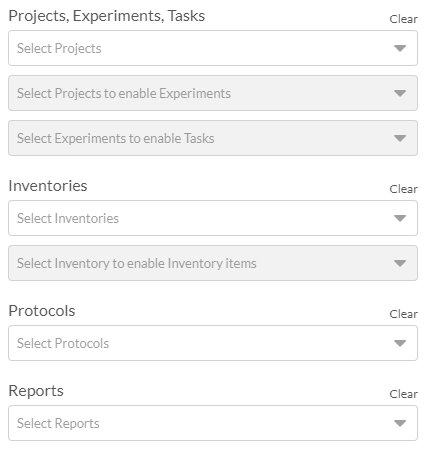 Another welcoming advancement is the improved autosaving in several text fields within SciNote. The users’ input in plan or rich text fields (on Tasks, Experiments and Projects) will now be saved on click away (without the need to click the Save button). This will ensure seamless saving of the data in SciNote and prevent data loss.

Even in case users will navigate away or close the browser without saving the text, their input will still not be lost. When returning to the field with the unsaved content, users will get the notification that there is an unsaved draft in the text field and they will be able to restore it simply.

Last but not least, we added some additional endpoints to SciNote API (focusing on the Task level), so that it now covers all the basic functionalities of SciNote. Integrations with SciNote will thus be even more powerful.

This SciNote Premium release includes all updates and features that were released in CORE 1.17.5.

With this release we enriched SciNote with new avatar images!

Instead of uploading your own profile photo, you now have an option to select a predefined image that you would like to use for your avatar. These have been designed in a way to reflect your role in the team, but you can also choose one according to your preferences.

How to set it up?

Simply go to Settings in your SciNote and on the Profile page click on your Profile photo to edit it. The avatar set-up window will open, where you can either upload your own photo or select one of the predefined avatars below. Clink on your preferred avatar and Save. 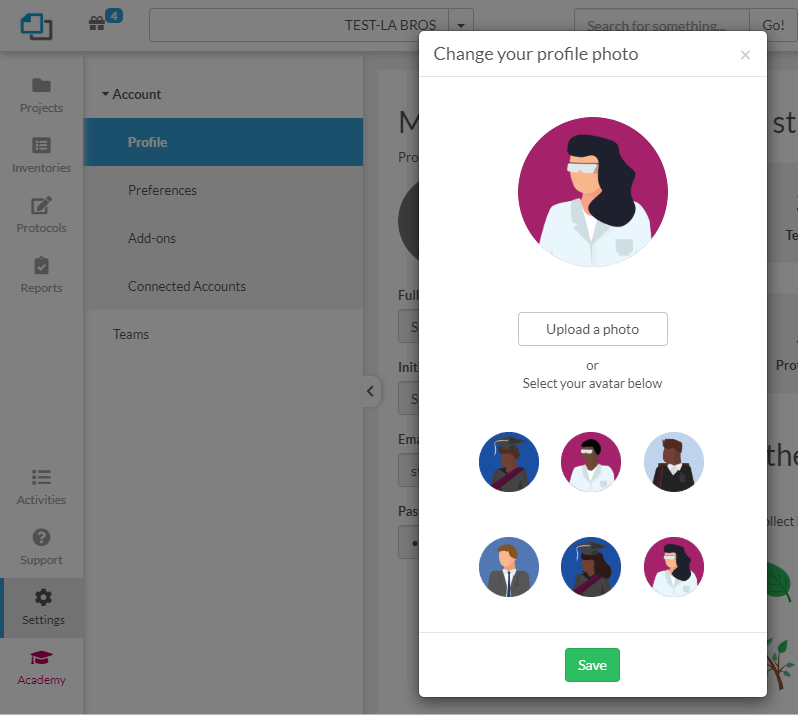 We are giving the 30-day free trial license (starting today) to all Scinote Premium users!

This trial license enables our Premium users to draw and modify chemical structures or chemical reactions directly from the SciNote interface as they work on their experiments. 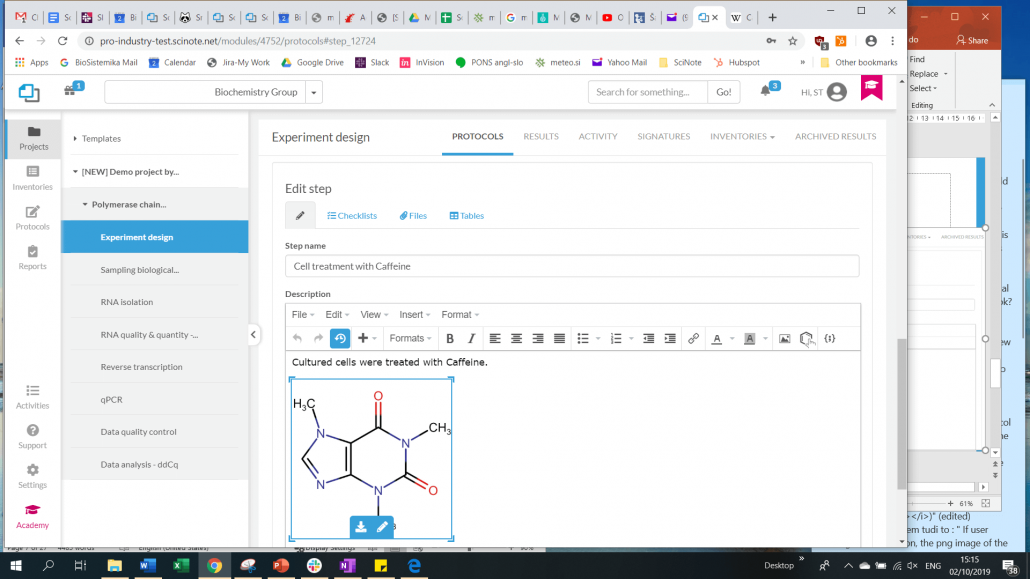 How does it work?

You can access the chemical drawing tool from any rich text editor field on Task (on Protocols or Results sections). A new icon named Create Chemical Drawing is now located in the top right corner of your rich text editor, next to the button for adding pictures.

Alternatively, you can create a chemical drawing as an attached file in any Attachments section in SciNote, by clicking on the button Create Chemical Drawing on the right, close to New Office file button.

A new window will appear with all the functionalities this chemical drawing tool has to offer. Here you can draw your chemical structures or chemical reactions, add text to the drawings, rotate or mirror molecules, represent your creations in 3D, etc. The tool also recognizes common names for compounds and draws them for you. You can add the name of the drawing in the top row.

When you are done, simply click Save and Close button. The image will be inserted directly into the text field in SciNote or attached as a file in the Attachments section, from where you have created it. You can then resize, edit or download the image.

What happens after the 30-day trial?

How to prolong the license?

If you are a SciNote Premium user and would like to prolong the use of this chemical drawing tool, contact your key account manager, or send us your request here, and we will guide you through.

If you do not use SciNote Premium yet, we kindly invite you to check out SciNote academia and industry plans here.

With this release we are introducing a new feature in SciNote – Inventory sharing that allows you to share individual Inventories between different Teams!

You will now be able to share visibility of the selected Inventories across selected Teams and have e.g. a “Central” inventory of Instruments, Reagents, Samples, etc.

Inventory sharing will only be enabled for Team administrators, by clicking the new Share button.

Inventory can also be shared across all teams at once, by selecting the All teams (current & new) option, which includes all current teams and any new team that will be created. 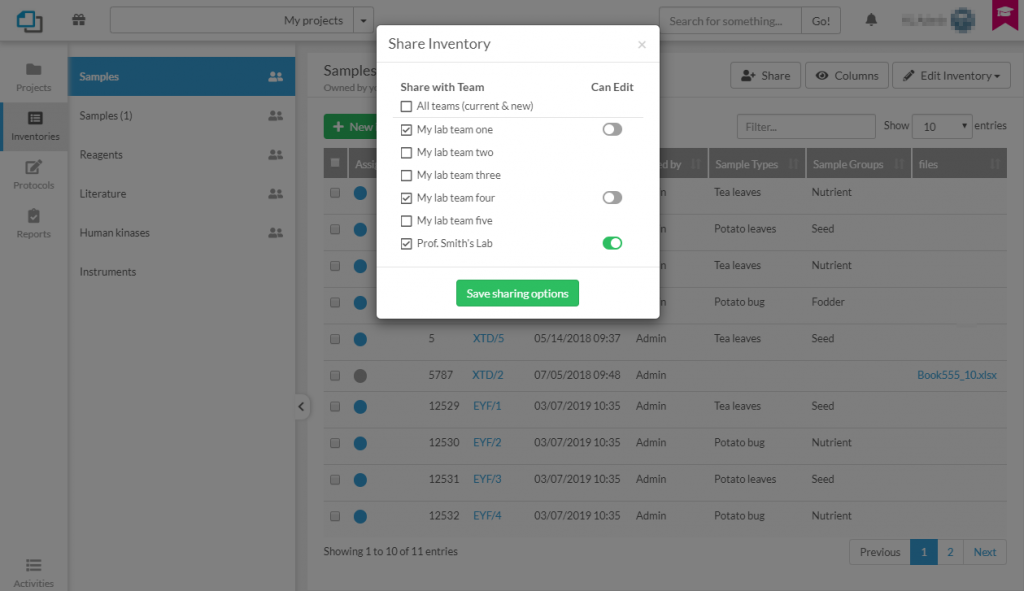 The shared inventory will automatically appear in the selected Teams’ lists of inventories. The “Shared inventory” icon beside the inventory’s name will display its shared status:

Your own shared inventory.

Inventory shared to your team with View permission.

Inventory shared to your team with Edit permission. 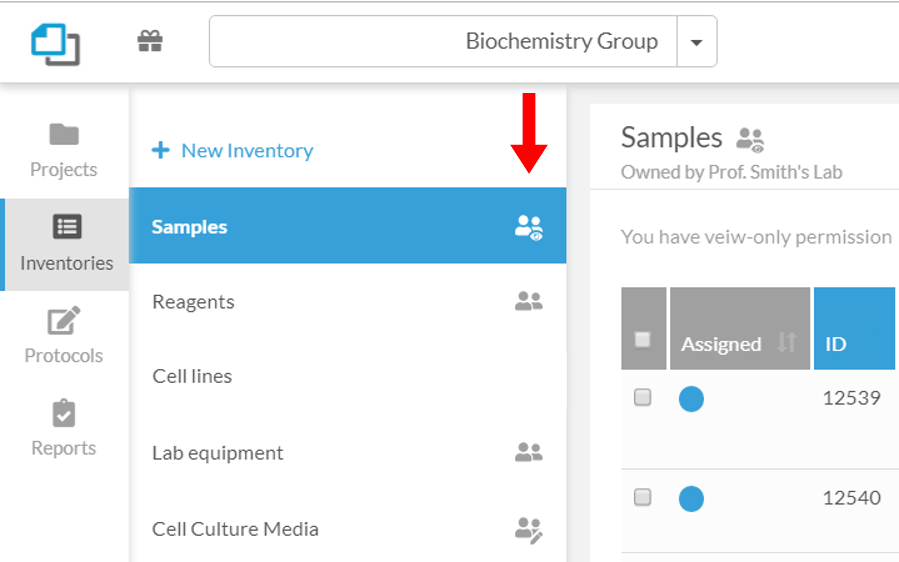 Of course, all activities regarding the inventory sharing will be recorded in the Audit Trail.

To learn more about View and Edit mode of sharing inventories with other Teams, read this article. 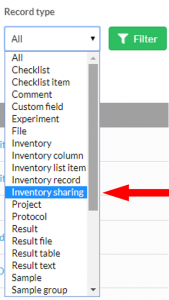 After this release you will be able to download reports in the .docx format which will enable you customizing report documents.

In addition to the images that already enable the thumbnail preview, here is the list of other file types that support this new feature: .xls, .xslx, .doc, .docx, .ppt, .pptx, .pdf and .txt.

We added External protocols tab into protocols inventory, which hosts the integration with protocols.io only, allowing you to search, preview and import a protocol directly from protocols.io.

In the search bar, users are able to search public protocols in protocols.io database with a help of predefined sorting options. When you click one of the buttons the corresponding sorting is applied to listed protocols.

Below, in the search results pane, the hit results are listed.

And last but not least, we created our own educational platform SciNote Academy where all SciNote users will be able to learn the basic and advanced SciNote functionalities.

From now on you are going to be able to access the SciNote Academy directly from the software. The SciNote Academy buttons are located in the upper right corner of the top bar and in the bottom of the menu bar as seen on the image below.

Besides the new additions, we made some other improvements as well:

This SciNote Premium release includes all updates and features that were released in CORE 1.16.3.

The task page (and protocol itself) just got a new refreshed look in addition to other improvements: rich text protocol description field (where you can add a rich text description of your task), a more powerful and improved attachments section, and a floating toolbar when editing descriptions.

We also added another option to the previous integration with Microsoft Office. From now on, you can create new MS Office files right from protocol repository, protocol step or results section.

To make sure you don’t lose your data, we got a brand-new functionality – autosave! In addition, whenever you will try to close the browser window, you will get a general warning if there is any unsaved data. If you navigate away the unsaved data will be saved in the browser and will be available next time you navigate to the same screen.

This time both SciNote Free and SciNote Premium are released at the same time. In addition to the implementations and bugfixes mentioned bellow, Premium release also includes everything from CORE 1.16.0.

A few new activities were implemented in order to make the Global activities page even more detailed, along with a couple of other minor optimizations.

A scroll bar was added to the team switch, which allows you to scroll through your teams in case you are a member of many teams.

For this release we have prepared a special treat for you that is Image Annotation feature!

Every image you upload in SciNote can now be edited – you can draw on it, write text, add different shapes and icons (e.g. arrows, circles, stars), change its colors and brightness, crop it, etc.

In order to annotate the image, click on it to open the image preview screen. Click the Edit button in the right upper corner to start editing. In the footer of the preview screen (below the image) you see the editing toolbar that includes undo, redo, crop, shape, text, etc.

After you are finished with annotating click Save & Close button in the right upper corner. Your image will be saved and its resolution preserved.

As for the image file types, the Image Annotation feature for now supports .jpeg and .png – more image file formats are coming soon.

Besides Image Annotation feature, another major update was released – the Advanced filtering of all activities in SciNote.

From now on, you can use advanced filters to search for specific laboratory activities you are interested in. You can filter the activities for an individual user or entire team in specific time period on a project, experiment or task level. You can also select the activities for the inventories, protocols and reports.

The Activities screen is divided into three panes: top filter, activity and side filter pane.

In the top filter pane you can expand or collapse the history of activities. In the activity pane up to 20 activities are displayed by default, but you can scroll down and click Show more activities. The side filter pane contains individual filters: Team, Activity created, Activity type, User and Object.

This SciNote Premium release includes all updates from the CORE 1.15.4 [SciNote Free].

With this release, Organization Administrators can now also become project members of any project by clicking “Add me as owner” on a project card.

With this release we are introducing What’s new notifications. There you will find all announcements about new releases, new features, major improvements and other important updates related to SciNote. Notifications related to your use of SciNote, such as your activities, exports, will remain in the same place.

Experiment templates are now available for you within the project card “Templates” on the main dashboard. You can choose between numerous, most commonly used life science experiments. Each of them includes descriptions, protocols and graphics.

You can easily edit and develop them further during your research work.

We also added a brand new Demo project to your dashboard. You can use it as a project template.

We updated look and feel of Experiment cards. They are slightly smaller now and the “Copy as template” button is more exposed making it even easier to copy experiments (e.g. from Templates) as templates.

We also made some performance improvements to make SciNote even faster.

Back to all release notes
Scroll to top